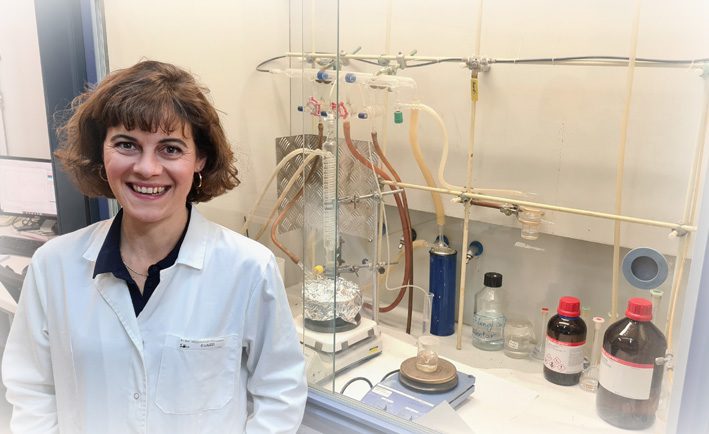 María Retuerto Millán, researcher at the Institute of Catalysis and Petrochemistry of CSIC, winner of the L’Oréal-UNESCO “For Women In Science” award.

The L’Oréal-UNESCO “For Women In Science” program, coinciding with the celebration of the International Day of Women and Girls in Science (11-F), has awarded prizes to 5 Spanish projects developed by female researchers under the age of 40, each with an endowment of 15,000 euros that will be used to continue funding their progress.

These studies range from the development of new methods of obtaining and accumulating renewable energies such as green hydrogen, to the early detection of eye diseases, to the study of the properties of neutrinos, which would allow us to broaden our knowledge of the universe and the development of new technologies, and the application of mathematics in geophysics to better understand the functioning of the planet.

“For Women In Science” has been present in Spain for 21 years, since the first international prize was awarded to Margarita Salas. Since then it has recognized 72 women researchers in our country and has awarded grants totaling 1.2 million euros. An initiative with a long history that this year is being celebrated in a context marked by the health and economic crisis of COVID-19, where the development of STEM (Science, Technology, Engineering and Mathematics) has proven to be more necessary than ever, not only to combat the virus, but also to ensure sustainable economic reconstruction. This year the program also launches the #QueremosCiencia campaign to make visible in the digital environment the need for these disciplines.

Among the awarded research is that of María Retuerto, from the Instituto de Catálisis y Petroleoquímica-CSIC. María is studying how to improve hydrogen technology, thus contributing to combating climate change. Two thirds of pollutant gas emissions originate in the energy sector, so to reduce them we must switch to a massive use of renewable energies. To this end, efficient methods are needed to accumulate this clean energy that can be converted into global sources.

For her part, scientist Sonia Ruiz Raga, from the Institut Català de Nanociència i Nanotecnologia (ICN2) is researching to create devices to convert sunlight into clean energy in an effective, cheap, durable and sustainable way. Specifically, Sonia is researching the development of photovoltaic technology with hybrid materials that facilitate the use of renewable energies globally. That is, as she explains, “in a few years we could even print solar cells at home to be able to carry them in all kinds of devices,” she explains.

Another award winner was Clara Cuesta, from the Center for Energy, Environmental and Technological Research (CIEMAT), whose work studies the properties of neutrinos, key particles in the universe, to better understand how they work, the origin of matter and the disappearance of antimatter. This knowledge will enable the development of cutting-edge technological applications in the field of industry.

The research of Jezabel Curbelo from the Department of Mathematics at the Universitat Politècnica de Catalunya, analyzes the evolution of fluids in nature through the equations that model them to better understand the dynamics of the interior of the Earth and other planets. His goal is to develop mathematical tools for application in geophysics with large applications in the near future.

Finally, Judith Birkenfeld, a scientist at the CSIC Institute of Optics, is researching the development of a tool for the early detection of keratoconus, an eye disease of the cornea that affects 1 in every 2,000 people in Spain and usually appears between the ages of 16 and 25. Early detection is key to slowing its development, reducing the need for corneal transplantation and improving the quality of life of thousands of people.

More than 3,600 women scientists supported by the program

Created in 1998, the L’Oréal-UNESCO International Prize “For Women in Science” recognizes five eminent women scientists from five regions of the world each year. Present in 117 countries, the program has since its inception recognized 3,600 women scientists, including Spain’s Margarita Salas and Nobel Prize winners. Alternating every two years between life sciences and materials sciences, these exceptional women researchers, selected by a jury of internationally renowned experts, are awarded a cash prize of €100,000 to fund their research and enable them to continue to make an exceptional contribution to the progress of science.

To know more about the L’Oréal-UNESCO “For Women in Science” program and the awarded women scientists: www.loreal.es