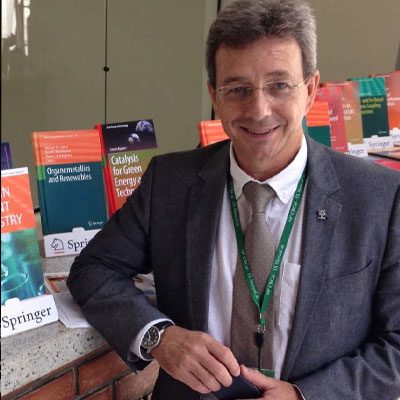 He has been Deputy Vice President of the Spanish National Research Council, CSIC in 2014-2015. He was awarded a “chaire d’excellence”  at ENSICaen-CNRS (FEDER) FRANCE for 2013-2014 and distinguished “Otto Mønsted Visiting Professor” Award at the Denmark Technical University, DTU, in 2014. He was Senior Visiting Research Fellow, Institute for Advanced Study, Hong Kong Univeristy of Science and Technology, Hong Kong in 2018.

Bañares catalysis research focuses on understanding catalysis by combining in situ and operando analyses with computational description of the structure, spectra and reactivity of the catalysts. He applies his research to the obversion of alkanes into olefins, oxygenates and nitriles, such as the conversion of propane intro acrylonitrile. He is also active on Raman spectroscopy real-time reaction monitoring in the liquid phase for bulk, sustainable and fine chemicals processes. In the past few years, two new lines have emerged: (a) Surface science reactivity has led him to develop a research line on the reactive basis of nanoparticle toxicity (e.g., www.nanoinformatix.eu ). (b), Ramana spectroscopy expertise has led him to aim at harmonization and standardization of Raman spectroscopy enabling FAIR (Findable Accesible Interoperable Reusable) Raman data bases for multiple applications, in catalysis, for for health, for document validation, for everyday use (e.g., h2020 CHARISMA project,
https://www.h2020charisma.eu )

Bañares is co-author of >210 papers, with an h index 47 and >8700 citations (GoogleScholar), with more than 48 plenary/keynote lectures.

SAVE & ACCEPT
Go to Top